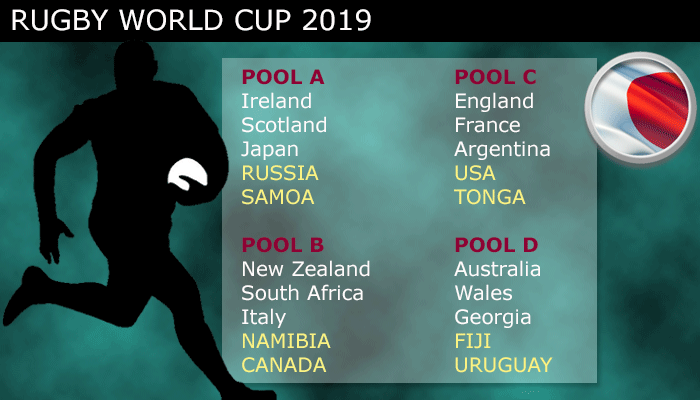 Canada became the final qualifier for Rugby World Cup 2019 after beating Hong Kong 27-10 in the concluding match of the repechage tournament in Marseille yesterday.

The Canucks join defending champions New Zealand, two-time winners South Africa, Italy and African qualifiers Namibia in Pool B, with their first match against the Azzurri in Fukuoka on 26 September next year.

Eight places in the finals were on the line when the qualification process began in St Vincent and the Grenadines on 5 March 2016, but after 188 matches involving 71 teams it was Canada who preserved their ever-present status on the Rugby World Cup stage in the final repechage event to join fellow qualifiers the USA, Uruguay, Russia, Fiji, Tonga, Samoa and Namibia in Japan next year.

A 65-19 win over Kenya in the opening round of the tournament put the Canucks well on the road to a place in Japan and they followed that up with a 29-10 triumph against Germany in the second phase to make qualification a certainty with victory in their final game, following Hong Kong’s 26-9 defeat against Germany in round one.

A 42-17 win against Kenya in round two kept Hong Kong’s hopes alive going into the final match but a try in each half by DTH van der Merwe helped the Canadians to a a hard-fought victory, with skipper Phil Mack delighted with the result.

“We’re over the moon,” he said. “Coming into this we knew it would be tough. We knew each game would be a different task. But all the support from home and the way the boys have dug in and got all the work done building up to this in the last year has been awesome. It was a super scrappy game but we are just so happy to come away with the win. We wanted to play straight away once the review from the last game was done, and get into this World Cup. Credit to the coaching staff, they came in when we were in a pretty bad spot but Kingsley (Jones) has upskilled us all and has put us in a position now where we are through to a World Cup. That goal is done but now the hard work really starts because we have got to go to a World Cup and perform. We’ll enjoy this moment but then we’ll have to hit the after-burners and work towards the World Cup.”

A hat-trick from flanker Sebastian Ferreira ensured Germany bounced back after seeing their qualification dreams ended by Canada to beat Kenya 43-6 in their final match to secure second place in the repechage standings, with Hong Kong finishing third and Kenya fourth.