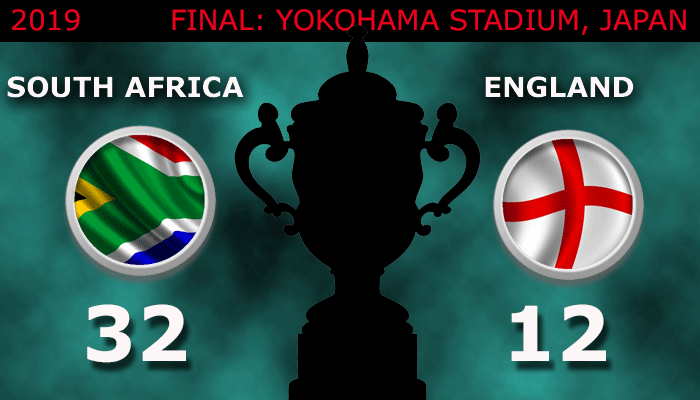 Siya Kolisi followed in the footsteps of Springbok legends Francois Piennar and John Smit in lifting the Webb Ellis Cup after leading South Africa to Rugby World Cup glory in a one-sided victory over England in the final at the Yokohama Stadium.

England started favourites after their stunning demolition of the All Blacks in the semi-final but, although they had their moments, they were totally dominated from the first whistle by Kolisi’s men.

The Springboks became the first team to lift the trophy after losing a game along the way… also joining New Zealand in becoming three-time champions.

Their only loss came in their opening game against the All Blacks, who were soundly beaten 19-7 by England in their last-four encounter.

After Handre Pollard had kicked South Africa into a good lead, the Boks finished off with two converted tries near the finish from wingers Makazole Mapimpi and Cheslin Kolbe to secure a 32-12 triumph.

Although it was the Springboks’ third Rugby World Cup final, and their third win, Mapimpi and Kolbe became their only try-scorers in the sport’s showpiece final game.

South Africa’s first black captain, Kolisi was playing his 50th test in front of Piennar, who became the nation’s first skipper to lift the trophy on home turf in the presence of Nelson Mandela in 1995.

Fly-half Pollard broke the South African record in a Rugby World Cup final with 22 points, the Springboks won the scrum count 11-3 and Duane Vermeulen won the Player of the Match award.

Eddie Jones’ Red Roses had the worst possible start when prop Kyle Sinckler was knocked out in the second minute while making a tackle, crashing into team-mate Maro Itoje. Dan Cole was thrown into the fray much earlier than expected and he spent the next six minutes trying to repel repeated Springbok attacks that eventually yielded a penalty for Pollard, as the England defence held out under intense pressure.

England continued to make many unforced handling errors trying to be too expansive off poorly set-up possession, with the scrum being put into reverse by strong Springbok pressure. When England finally stabilised a scrum, Billy and Mako Vunipola carried strongly with Owen Farrell slotting over a penalty to tie the scores.

South Africa lost hooker Mbongeni Mbonambi to a head injury and lock Lood de Jager to an arm injury, sending on Malcolm Marx in the front row and Franco Mostert in the second row as the game started to take its toll on players.

But South Africa gained a penalty following another poor England scrum which Pollard dispatched to put the Springboks 6-3 ahead. England came back strongly though and put together their best spell of the first half but, to South Africa’s credit, the pressure only produced one score with Farrell adding a second penalty to level the game at 6-6.

Yet again England’s discipline proved their downfall and Pollard capitalised with a third penalty, before a fourth near the end of the half extended the Boks’ lead to 12-6.

Farrell kicked four penalties in all to keep his team in touch at 15-9, but missed an opportunity when Jones’ side were within striking distance of the Springboks at 18-12.

Mapimpi’s 66th-minute try proved the decisive touchdown, with Kolbe making the game safe with an example of his huge talent to score on the other wing and launch celebrations all over South Africa. 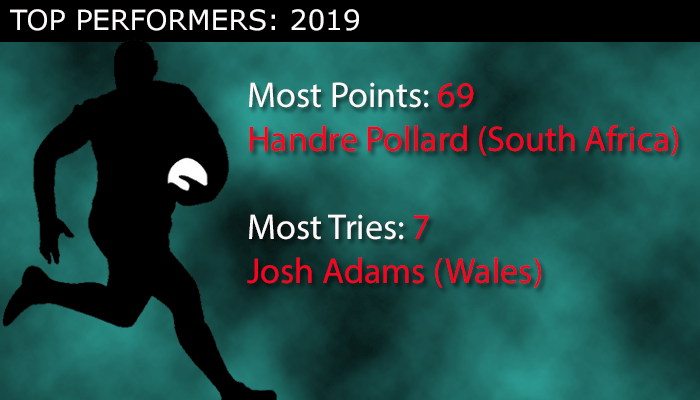