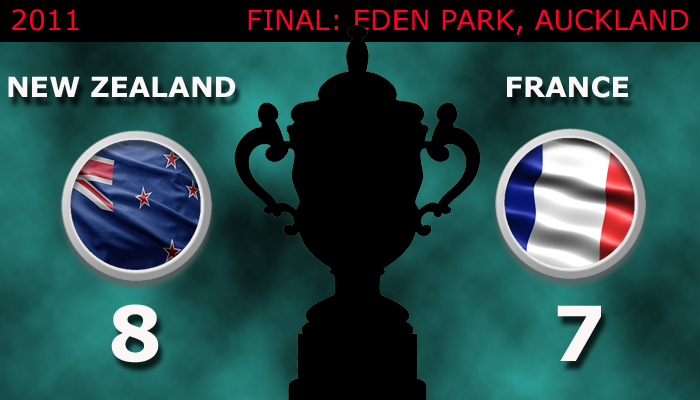 New Zealand were crowned world champions for the first time in 24 years after squeezing past an inspired France team by a single point.

Tony Woodcock's early try and a penalty from fourth-choice fly-half Stephen Donald were enough to see the All Blacks home in an extraordinary match that defied all pre-match predictions.

France produced their best performance of the tournament and appeared to be close to pulling off one of the great upsets after captain Thierry Dusautoir's try with half an hour remaining set up a nerve-shredding finale.

But Francois Trinh-Duc missed a long-range penalty before desperate defence saw the favourites hang on for a famous win.

The final whistle triggered scenes of wild jubilation at Eden Park as a nation celebrated a repeat of the outcome from the very first World Cup final in 1987.

And when skipper Richie McCaw hoisted the Webb Ellis Trophy high into the night, a quarter of a century of hurt was blown away in an explosion of fireworks and cheering.

An already febrile atmosphere within the ground before the start had been stoked still further when France's players formed an arrow formation to face down the haka, and then advanced slowly over halfway as the capacity crowd roared.

The drama seemed to unsettle the players, both sides making early errors, and when Piri Weepu pulled a penalty badly wide the nerves began to spread to the stands.

With one well-worked line-out move they were soon silenced. Weepu put a penalty into the corner, Jerome Kaino took the ball off the top and popped it down into the arms of the advancing Woodcock to put the veteran prop through a gaping hole. Weepu missed a simple conversion but France were rattled.

For all their good early work they found themselves on the end of some harsh decisions from referee Craig Joubert at the scrum and breakdown. With fly-half Morgan Parra forced off with a head injury the All Blacks began to dominate possession, only for Weepu to miss another straightforward penalty.

The scrum-half's struggles meant the lead remained at just five points instead of a possible 13, and with half-time approaching the tide began to turn. Fly-half Aaron Cruden was carried off forcing coach raham Henry to bring on Donald - a man who had been fishing for whitebait a fortnight previously before injuries to Dan Carter and Colin Slade triggered his emergency call-up.

France's own stand-in stand-off Trinh-Duc had a chance to reduce the deficit to just two points only to slide a penalty from the left touchline across the face of the posts, and was then penalised by Joubert to give Donald the simplest of kicks for 8-0.

If some expected France to fold, Les Bleus had other ideas. Trinh-Duc gathered a poor kick from Weepu and sliced through the All Blacks line again, and although Dimitri Yachvili slipped with the line at his mercy the ball went wide, was recycled and put into the hands of skipper Dusautoir to slide in under the posts. Eden Park was stunned, Trinh-Duc converting for 8-7 and the previously impregnable home side badly rattled.

France were transformed from the feeble, divided unit that had squeaked past Wales in the semi-final, their half-backs finding the corners with beautifully judged kicks from hand, the forwards making yards with every drive and a reorganised Kiwi lineout beginning to malfunction.

With 16 minutes left on the clock and the tension climbing through the roof, Trinh-Duc tried his luck with a penalty from just inside halfway only to push it wide, but the unthinkable now seemed a real possibility.

Replacement Damien Traille burgled a high ball from Israel Dagg and made good ground, the All Blacks scrum coming under increasing pressure and the crowd falling silent as their World Cup dream threatened to become a nightmare.

With the seconds slipping away and the gap just one point, France went through an 18-phase attack that made little ground but resulted in an attacking scrum on the New Zealand 10m line, only for the hosts to steal the ball back when Aurelien Rougerie was wrapped up.

The All Blacks drove upfield, using up the remaining moments, and when Joubert blew for another French infringement, the biggest party in New Zealand's history was under way. 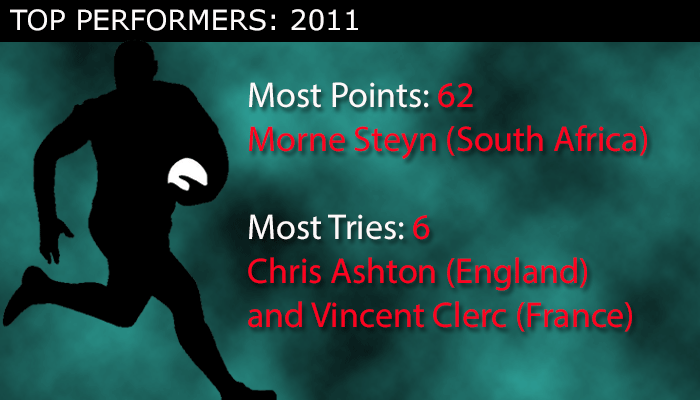