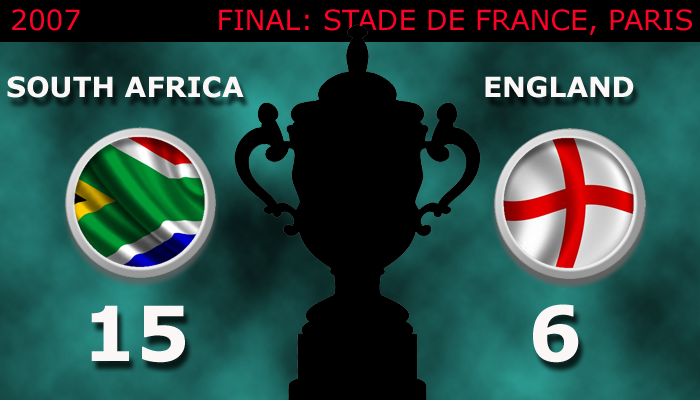 A ruthless South Africa punished England's ill-discipline for a tight 15-6 win over the defending champions at the Stade de France.

Full-back Percy Montgomery kicked four penalties and 20-year-old centre Francois Steyn one to hand the Springboks their second World Cup triumph after their victory on home soil in 1995.

Despite holding their own for most of the game, England could not avenge a humiliating 36-0 loss to South Africa in the pool stage barely five weeks earlier.

They again showed the forward grit and determined defence that saw them record upset wins over Australia and France on their way to the final but could only notch up two penalties from outside-half Jonny Wilkinson.

Montgomery opened the scoring with his first penalty in the seventh minute when England centre Mathew Tait slipped on the greasy pitch and held on when caught in possession in front of the posts.

England's early aerial bombardment paid off when the ball was worked wide after Mark Cueto and Mike Catt combined to strip JP Pietersen of the ball after an Andy Gomarsall up-and-under. Bryan Habana put in a bone-crunching tackle on Paul Sackey on the right wing but did not roll away, and Wilkinson nailed a tough penalty from close to the touchline.

Montgomery restored the Springboks' advantage after Lewis Moody, in an offside position, aimed a cynical kick at Butch James and South Africa took a 9-3 half-time lead after hands in the ruck by prop Andy Sheridan gifted Montgomery a third penalty.

The second period started in dramatic fashion, Tait ducking a high Steyn tackle, and streaking 40 metres towards the line, rounding Montgomery before being brought down by a fantastic covering tackle by Victor Matfield.

The ball was spun wide and found Cueto with five metres to go, but a desperate tackle by No 8 Danie Rossouw was ruled to have taken the winger into touch.

Wilkinson immediately claimed a consolation penalty after the Bok backs were ruled offside but English ill-discipline, this time by Martin Corry with hands in the ruck, was again punished by a fourth Montgomery penalty.

Steyn then made amends for a missed long-range penalty with a successful 47-metre shot at goal after obstruction in the England backs with just under 20 minutes to go.

South Africa were then content to play the percentage game, clearing their lines effectively and swarming over any English attack in the same manner that saw them progress through the seven-week, 20-nation World Cup unbeaten and deserved winners. 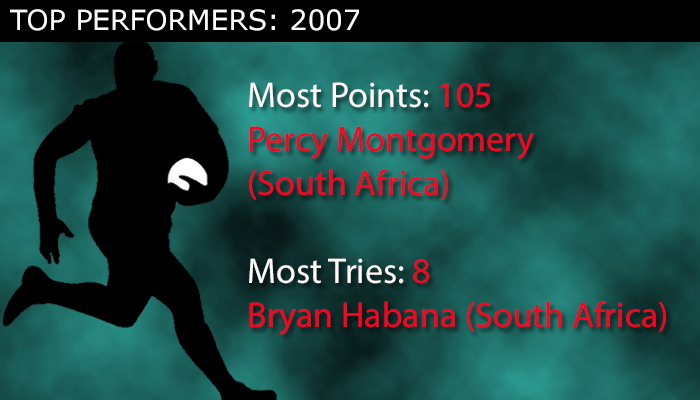