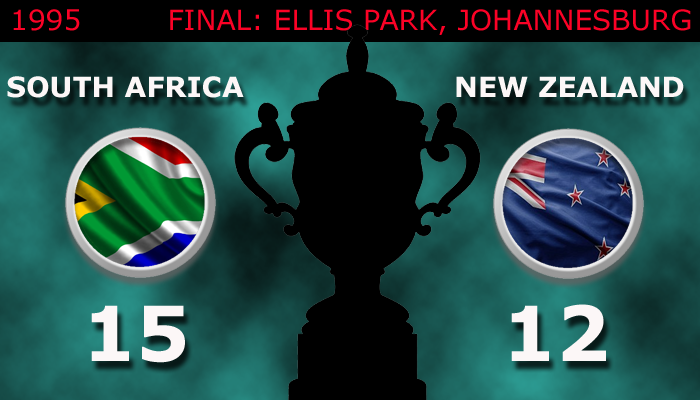 The 1995 tournament was seen as the dawning of a new era with post-apartheid South Africa welcomed back into the international sporting frame.

The 1995 tournament was their chance to unite a nation and Springbok captain Francois Pienaar and manager Morne du Plessis worked hard to foster the feeling of the "rainbow nation".

Few moments in sporting history have been as poignant as Pienaar receiving the William Webb Ellis Trophy from new South African President Nelson Mandela, sporting his own Springbok jersey.

Sceptics pointed to the fact only one black player had a part to play in the tournament, but Chester Williams certainly made a name for himself obliterating opposition defences and clearly earning his place in the team.

South Africa had done everything right but the final was billed as New Zealand's time to shine once more with a certain Jonah Lomu having taken the tournament by storm.

The All Blacks had demolished everyone in their path but not in the final. The Springboks decided to shut up shop defensively and mark Lomu out of the game.

Neither side could find a way through for the duration of the game in front of 63,000 spectators, with the All Blacks going into the second half just 9-6 down and levelling courtesy of an Andrew Mehrtens penalty.

The match went into extra-time, with each side notching up an early penalty. But the game finally headed South Africa's way in the second half of extra-time when Joel Stransky received the ball and slotted over the winning drop goal. 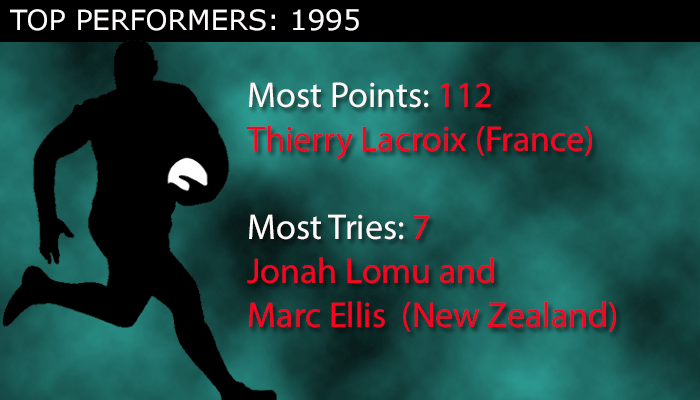