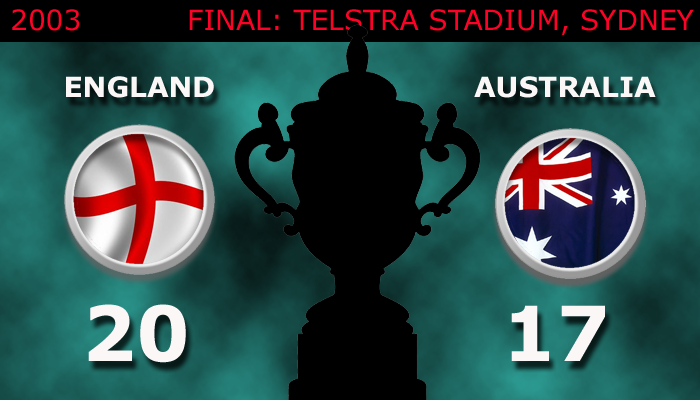 England won the 2003 Rugby World Cup with a breathtaking Jonny Wilkinson drop goal just 26 seconds from the end of a thrilling final in Sydney.

Millions watched around the world as captain Martin Johnson became the first player to lead a northern hemisphere side to the world title.

Australia battled hard and were never out of the game but ultimately fell just short, despite opening the scoring through wing Lote Tuqiri.

The Wallabies started strongly when Tuqiri outjumped Jason Robinson to a huge Stephen Larkham bomb with just six minutes on the clock.

The score was no more than Australia deserved but three Wilkinson penalties soon silenced the home support.

Despite the damp conditions both sides chose to keep the ball in hand and as the game progressed England's pack began to dominate.

With just 10 minutes of the first half left, Ben Kay knocked on with the line beckoning to the frustration of the visiting fans.

Minutes later, England finally silenced their critics when Robinson ran in wide on the left after a powerful midfield burst from Lawrence Dallaglio.

In the second half towering performances from Johnson and Dallaglio gave England the upperhand but just as they looked likely to pull away, two sloppy penalties allowed Elton Flatley to bring his side back within touching distance.

Will Greenwood knocked on inside the Wallabies' 22 and Wilkinson then missed a drop goal as the match entered a tense closing quarter.

Runs from the powerful Stirling Mortlock and George Smith pushed England back into their own half and as referee Andre Watson prepared to blow for full time, Flatley slotted his third kick of the half to push the match into extra-time.

The players looked understandably exhausted and when Wilkinson and Flatley again swapped penalties the match looked as if it was heading into sudden death but England were not to be denied and it was fitting that Wilkinson sealed the most memorable result in English rugby history. 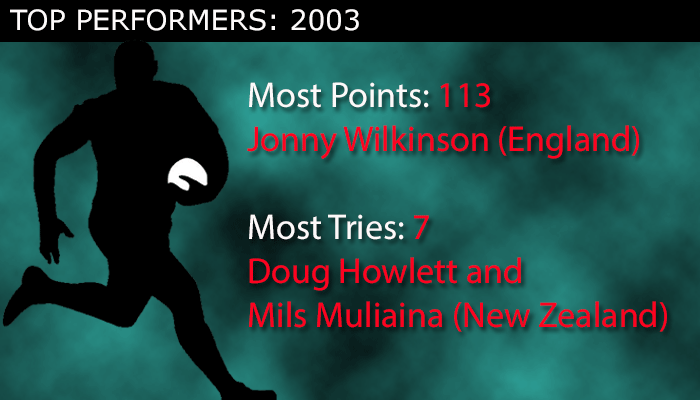